TORONTO, Nov. 24, 2022 (GLOBE NEWSWIRE) — Labrador Uranium Inc. (“LUR”, “Labrador Uranium”, or “the Company”) (CSE: LUR, OTCQB: LURAF, FRA: EI1) is pleased to announce that it has closed the previously announced acquisition (the “Acquisition”) of the Anna Lake project (License No. 34834M) and the Moran Lake B-Zone prospect (License No. 027543M), (together, the “Projects”), pursuant to the purchase agreement dated October 13, 2022 between LUR and Beaconsfield Ventures Ltd. (“Beaconsfield”).

Stephen Keith, CEO commented, “We are excited to complete the acquisition of the Anna Lake and Moran B Projects, adding both strong exploration targets and historical mineral resource estimates to our significant land position in Labrador, Newfoundland. The focus of our exploration work in 2023 will consist of drill testing possible extensions to known mineralization, upgrading existing targets away from current mineralization through on the ground field work as well as prioritizing regional scale targets through undertaking of an extensive geophysical program. Following closing of today’s financing, we are well funded with approximately $11.5 million in cash on hand, including $8 million in flow through funds to complete next year’s extensive work program.” 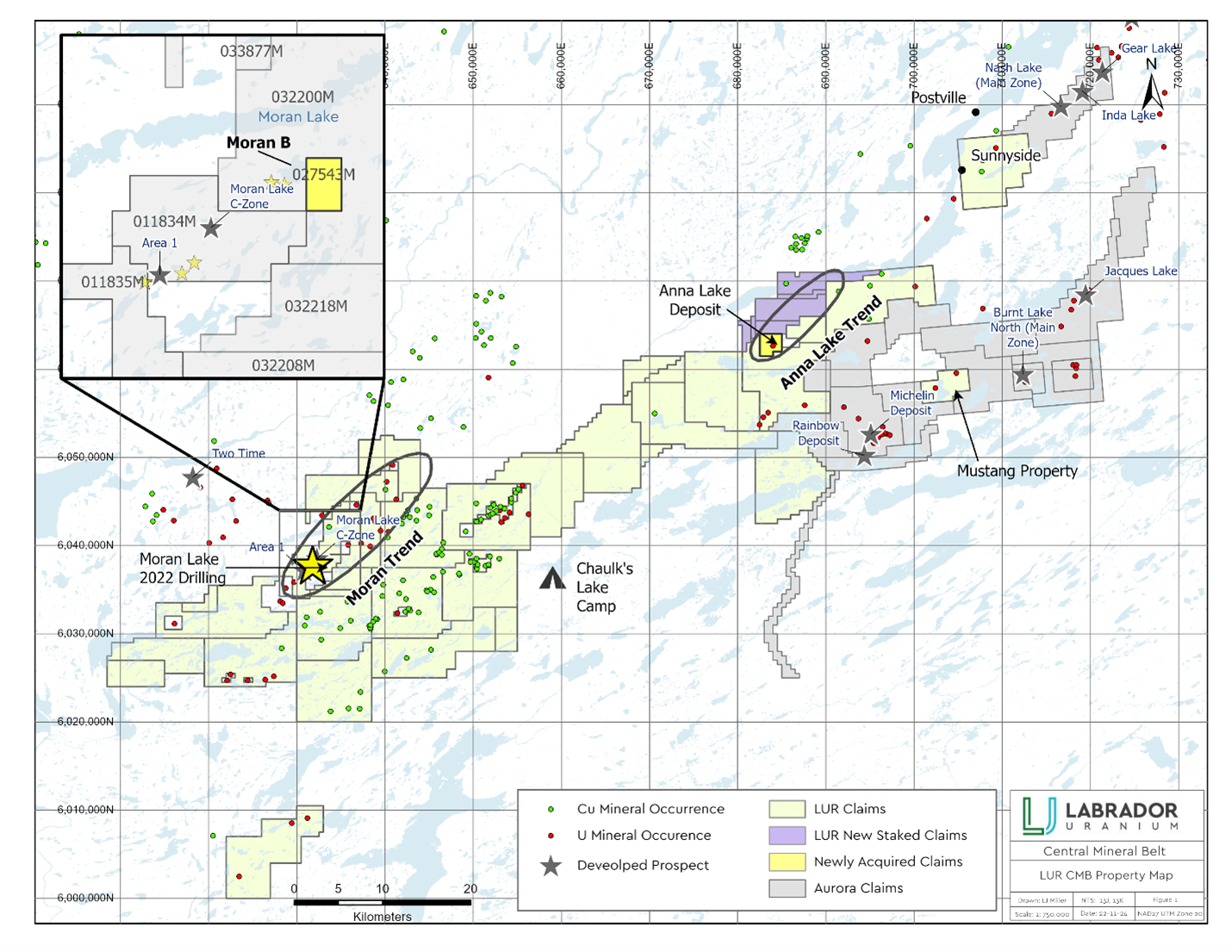 Figure 1: Labrador Uranium Projects and Claims on the Central Mineral Belt in Labrador.

With the proceeds from the current capital raise, the Company is planning to complete a belt-wide airborne gravity survey over a significant percentage of the Central Mineral Belt (“CMB”), essentially covering all current Company tenured areas and beyond.

Significant Iron Oxide Copper-Gold-Uranium (“IOCGU”) deposits, analogous to those we believe are potentially present in the CMB, are invariably marked by oval-shaped, kilometer-scale gravity anomalies, reflecting enormous accumulations of iron-rich hydrothermal alteration. The Company is encouraged by the fact that an earlier, but smaller, airborne gravity survey completed by Monster Copper in 2003 in the western part of the CMB, successfully defined large masses of hematite-altered, mafic volcanic rocks closely associated with important uranium and copper occurrences around Moran Lake.

The types of large and productive mineral systems for which the Company is exploring in the CMB would be detected by the initially wide-spaced (400 meters) airborne survey, with closer spaced (200 and 100 meters) infill surveying planned to focus on significant density anomalies. Machine Learning targeting technology, currently being developed by the Company, is being incorporated into the planning process, assisting in defining the limits and focus of the airborne gravity survey.

The planned airborne gravity survey will give the Company a corporate advantage in the exploration of the CMB, helping to focus the Company´s future exploration for large Copper-Gold-Uranium deposits. 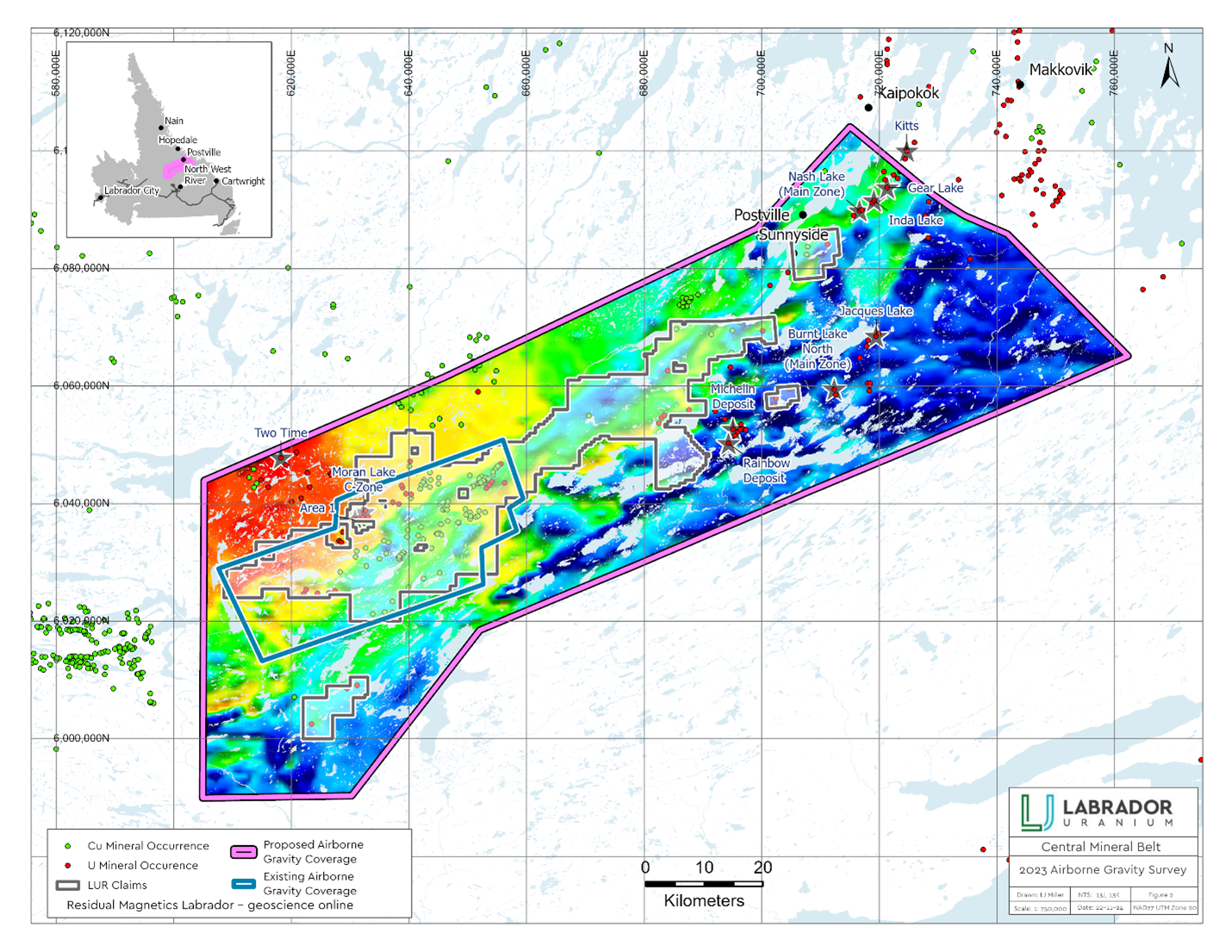 LUR is also pleased to announce that it has completed a non-brokered private placement offering of up to 6,111,111 flow-through units in the capital of LUR (the “Units”) at a price of $0.45 per Unit for gross proceeds of $2,998,800 (the “Flow-Through Offering”). Each Unit consists of one “flow-through” Common Share (each, an “FT Share”) in the capital of the LUR within the meaning of subsection 66(15) of the Canada Income Tax Act (“ITA”) and one-half of one “non-flow-through” common share purchase warrant (each whole warrant, a “Warrant”). Each Warrant entitles the holder thereof to purchase one non-flow-through Common Share (each, a “Warrant Share”) at an exercise price of $0.60 per Warrant Share for a period of 24 months.

In addition, an aggregate of 333,200 common shares of LUR were issued as finder’s fees to arm’s length parties that introduced the Company to certain subscribers participating in the Flow-Through Offering. All securities issued in connection with the Flow-Through Offering are subject to approval of the CSE and a statutory hold period under Canadian securities legislation ending four months and one day following the date of issuance.

Labrador Uranium is also pleased to announce that it has filed an updated NI 43-101 technical Report for the CMB Project area on a voluntary basis in order to reflect the increased land package of the CMB Project area. The technical report entitled “NI 43-101 Technical Report, Central Mineral Belt Property, Newfoundland and Labrador, Canada” with an effective Date of May 7, 2022 and signing date of November 7, 2022 is now available under the Company’s profile on SEDAR at www.sedar.com.

The scientific and technical information contained in this news release was reviewed and approved by Matthew Melnyk, M.Sc., CPG, an advisor to LUR, who is a “Qualified Person” (as defined in NI 43-101).

Labrador Uranium is engaged in the exploration and development of uranium projects in Labrador, Canada and holds a dominant land position with 52 Mineral Licences covering 152,825 ha in the prolific Central Mineral Belt (“CMB”) in central Labrador and the Notakwanon Project in northern Labrador. Currently, the Company is advancing the district scale CMB Project which includes the Moran Lake Deposit and Mustang Lake Project. The CMB Project area surrounds several known uranium prospects, including Paladin Energy’s Michelin deposit, with substantial past exploration work completed, and numerous occurrences of uranium, copper and IOCG style mineralization.

This news release contains “forward-looking information” within the meaning of applicable Canadian securities laws. Forward-looking information includes, but is not limited to, statements with respect to completion of the Acquisition, completion of the Flow-Through Offering, the approval of the CSE, potential mineralization, exploration activities and planned future exploration activities, and other activities, events or developments that are expected, anticipated or may occur in the future. Generally, but not always, forward-looking information and statements can be identified by the use of words such as “plans”, “expects”, “is expected”, “budget”, “scheduled”, “estimates”, “forecasts”, “intends”, “anticipates”, or “believes” or the negative connotation thereof or variations of such words and phrases or statements that certain actions, events or results “may”, “could”, “would”, “might” or “will be taken”, “occur” or “be achieved” or the negative connotation thereof.

Forward-looking information and statements are based on our current expectations, beliefs, assumptions, estimates and forecasts about LUR’s business and the industry and markets in which it operates. Such forward information and statements are based on numerous assumptions, including among others, that general business and economic conditions will not change in a material adverse manner, that locations of historical mineral resources estimates could lead to new mineralization discoveries and potentially be verified as current mineral resource estimates, that financing will be available if and when needed and on reasonable terms to conduct further exploration and operational activities, and that third party contractors, equipment and supplies and governmental and other approvals required to conduct the Company’s planned exploration activities will be available on reasonable terms and in a timely manner. Although the assumptions made by LUR in providing forward-looking information or making forward-looking statements are considered reasonable by management at the time, there can be no assurance that such assumptions will prove to be accurate.

Forward-looking information and statements also involve known and unknown risks and uncertainties and other factors, which may cause actual results, performances and achievements of Labrador Uranium to differ materially from any projections of results, performances and achievements of Labrador Uranium expressed or implied by such forward-looking information or statements, including, among others: limited operating history, negative operating cash flow and dependence on third party financing, uncertainty of additional financing, delays or failure to obtain required permits and regulatory approvals, no known mineral resources/reserves, aboriginal title and consultation issues, reliance on key management and other personnel; potential downturns in economic conditions; availability of third party contractors; availability of equipment and supplies; failure of equipment to operate as anticipated; accidents, effects of weather and other natural phenomena and other risks associated with the mineral exploration industry; changes in laws and regulation, competition, and uninsurable risks, community relations, delays in obtaining governmental or other approvals and the risk factors with respect to Labrador Uranium set out in LUR’s listing statement dated March 2, 2022 filed with the Canadian securities regulators and available under LUR’s profile on SEDAR at www.sedar.com.

EXIT FROM WORK: What Will The New You Look Like?
15,89 EUR
Comprar en Amazon